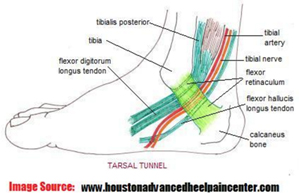 Inside this tunnel are several structures one of which is a big nerve called the tibial nerve. Tarsal tunnel syndrome is when this nerve gets compressed (or squished) by the structures around it. When the nerve gets compressed, it can result in swelling, tingling, shooting pain, burning pain, or general pain and instability at the inside of your foot and ankle area. It can sometimes result in muscle weakness too.

Tarsal tunnel syndrome is caused by anything that reduces the amount of space in the tarsal tunnel and so compresses the nerve. It could be after trauma such as a blow or sprain, from overuse such as after a marathon, a very flat foot structure which puts strain on the surrounding tendons or less commonly by a space occupying lesion such as a tumour or swelling of sorts.

Treatment is aimed at eliminating the cause for the compression as well as managing the symptoms. This will help prevent recurrence.

What you can do from home:

Treatment from the podiatrist:

We fix problem feet. We're results-driven & patient-centered clinics for people of all ages. With thorough assessment & tailored treatment we will fix you from the ground up.