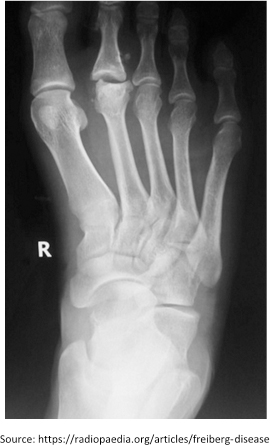 metatarsal dies due to insufficient or interrupted blood supply. The second metatarsal is one of the long bones at the front of your foot and the head sits in the ball of your foot behind your second toe.

Regardless of the exact cause Freiberg’s infraction most commonly presents in women aged 11-17 years. Typical symptoms include a limp with significant pain in the ball of the foot and possibly localised to the head of the affected bone. The pain may only be present during or worsened by activity and there may be some stiffness. Other symptoms may include swelling, tenderness and callousing.

Because of the nature of the symptoms, Freiberg’s infarction may sometimes be confused with Morton’s neuroma, capsulitis, synovitis or a stress fracture.

Freiberg’s infraction results in collapse of the bone and cysts at the joint in the head. This leaves a flat rather than rounded head to the bone with a wider gap at the joint.  The metatarsal head may also have fragments flake off and sclerosis occurring at the bone margins. These changes to the bone increase the likelihood of developing painful osteoarthritis at the joint later in life so it is important to seek management while the infraction is active to minimise damage to the joint and to help with symptomatic management

– This can be complemented by therapeutic ultrasound, ice and NSAIDs such as ibuprofen

– This will involve supporting the affected metatarsal and limiting movement at the affected joint to prevent further damage to the joint. This will likely involve custom orthotics with metatarsal padding and good quality footwear

– Shoes with high heels should be avoided in the future.

– Osteoarthritis is a very likely outcome after having Freiberg’s infraction although it may not occur until a few to many years later.

– Further reduction in movement at the joint is ideal

We fix problem feet. We're results-driven & patient-centered clinics for people of all ages. With thorough assessment & tailored treatment we will fix you from the ground up.